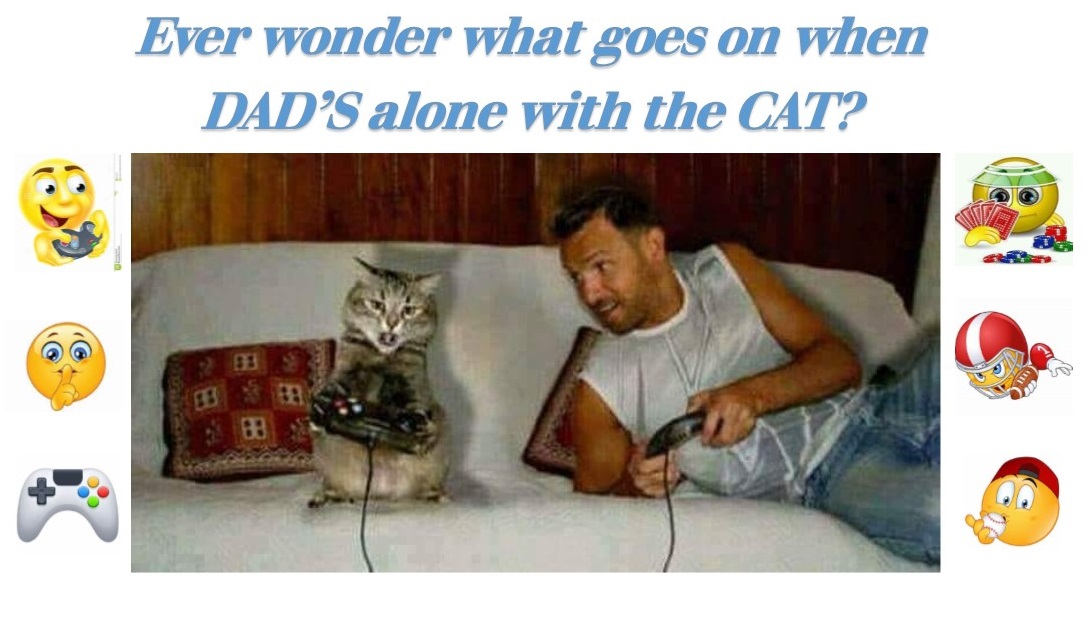 Believe it or not there has been a surge in popularity of Cat Daddy’s in recent years. Most people are still under the impression that men are mainly dog people and the majority of pets in households is mainly dogs. Well not anymore folks, nothing against our canine friends but Kitties are now leading the way in the U.S. as household pets, although here it’s mostly women. Also just so you know I LOVE BOTH and I’m not partial to one over the other.

Interestingly, studies actually show more than 2/3 of cat owners are men in the U.K. especially with the younger ones ages 16-34. Check it out….

An online movement of men is shrugging off the stereotype that ‘cats are for girls’ and flaunting their affinity for kitties, writes Hayley Gleeson. And they’re giving others permission to embrace a gentler, more thoughtful kind of masculinity.

Myles Loughran is a cat man. There’s something about cats,” the 29-year-old co-owner of Cat Cafe Melbourne tells ABC News. “I feel they can give you that real dedication that a lot of animals can’t. And even though they can be a bit aloof, when they bond with you, there’s nothing like it.”

Though starting a business based entirely on cuddling and playing with cats might be an extreme manifestation of cat love, Mr Loughran represents a burgeoning movement of men who are shaking off the tired stereotype that cat ownership is exclusively a feminine pastime and publicly embracing their affinity for kitties.

In Australia the rise of ‘cat men’, as they’ve been dubbed, can mostly be observed on social media, where countless pages exist to document the relationship men of all ages and backgrounds have with their cats. “For too long, there’s been a stereotype about cat guys. Unmanly. More soft than rugged. More feminine than masculine,” reads the ‘about’ section of the It’s Okay to be a Cat Guy Facebook page. “It’s time to show the world that it’s OK to be a cat guy.”

It’s also where many celebrities — including comedian and radio host Hamish Blake, singer Ed Sheeran, Chanel designer Karl Lagerfeld and comedian and actor Russell Brand — post sweet photographs and doting captions of their feline friends. Research shows there are 2.3 million ‘cat people’ — those who have cats but not dogs — in Australia, one million of whom are men. The report also found Aussie cat men earn more, on average, than non-cat men; are 29 percent less likely than the average man.

So why then are CATS considered Feminine?…

Of course, this stereotype has endured for hundreds of years and who knows maybe it was never true. Since at least the 19th century writers have observed that, among English speakers, cats have been associated with females and the feminine, while dogs — “man’s best friend” — have been thought of as male, and masculine.

The emergence of cat men online to a range of factors: urbanisation and the trend towards apartment living, which is conducive to keeping cats; the “rise of the metrosexual” man, who is confident enough in his masculinity to embrace his feminine side — particularly in his fashion choices; and, of course, the internet — original home of the cat meme.

Thanks to social media, Dr Fraser says, men can “join forces with other people sharing cat love. You’re not some whacko from whatever town; you are part of an entire network of ‘men who love meow’ or whatever sort of groups. “That gives people a lot more license to strut their own stuff, I think.” It may also allow men to express a kinder, more thoughtful form of masculinity they may want, but feel afraid, to embrace.

Recent research has shown that branding a man a ‘cat person’ does “not diminish his masculinity or heighten his femininity” — despite the fact the stereotype of ‘cat people’ as feminine has persisted into the 21st century.

Having stated all this let me confidently say there is no one way to be a CAT Daddy. Aligning things, animals or people into specific genders is problematic because gender is not always black/white or blue/pink. CAT Daddy’s are an antidote to toxic masculinity in my opinion.

In fact, Dr Fraser agrees with me and believes this rejection of “old fashioned” gender stereotypes is partly why cat men, many of whom have no qualms revealing their affectionate side, are so attractive to women. (And it’s at least partly why Instagram accounts like ‘Hot dudes with CATS’ have so many followers, or why Vanity Fair had Australian actor Chris Hemsworth pose for a cover shoot last year with several handsome long-haired cats.)

I think it’s a beautiful thing when it comes to mainstream representations of ‘manliness. To see the tenderness and vulnerability a man reveals when he poses with a sleepy kitten, and boasts of its cuteness, is rare. I like to see men defying the narrow straight-jackets of the ‘he-men’ of the past.

In conclusion I believe growing popularity of cats is a good thing. It allows boys that are growing up to have better relationships with cats and, by extension, other kinds of creatures which makes a better future for everyone.

Today celebrate the CAT DADDY’S in your world and let them know they rock! Until next time Remember Pets Rule!

“Is There A CAT DADDY In Your Life?…”